How Healthy are Potatoes?

Potatoes are the most commonly eaten vegetable in America with the average American eating over 50 lbs a year! We use them in hundreds of dishes and prepare them in dozens of different ways, from chips and fries to baked, mashed, and roasted, and the list goes on. As a result, the potato industry is a multi-billion dollar business, with the value of potato crops grown in the US valued at around $3.73 billion dollars in 2013 alone. As with any other industry this results in a push to produce more and bigger potatoes, which as discussed in our Nutritional Inflation post, often leads to potatoes that have less nutritional value. Although inexpensive, commonly eaten, and with wide variety of recipes, potatoes contain much less nutritional value than many other vegetables in your produce isle, and even less than their ancient ancestors. We’ll tell you how to squeeze the most value out of your favorite spuds!!

A Brief History of Potatoes

The Incas and other native tribes have grown potatoes in South America for thousands of years. They served a wide variety of uses, ranging from healing broken bones to measures of time. Another wild ancestor of potatoes in North America known as an apio contained high levels of cancer fighting compounds and was used as a paste to treat skin tumors by the Sioux. The potatoes that were discovered by the Spanish explorers and were brought back to Europe, however, did not retain many of these medicinal uses and quickly became one of the most important staple crops in the Old World, so much so that countries like Ireland became primarily dependent on them for food. Heck, we’ve even seen potatoes powering small lights at the local science fair- potatoes can do almost anything!

Nowadays potatoes are commonly associated with the starch family of foods than as a vegetable, partially because we have bred them for their starch. Compared to their ancestors, which were much higher in protein and cancer fighting compounds, modern varieties of potato can contain over 28 times less phytonutrients. In addition, starchy foods like potatoes are rapidly becoming a contributing factor in the exponentially rising incidence of type 2 diabetes. This trend has to do with how quickly a food releases sugar into the blood stream, also known as the glycemic index.

Some foods release small amounts of sugar over a longer period of time, these are low-glycemic index foods. These foods more closely resemble the diet that our ancestors ate, and the diet that our bodies have evolved to handle. With the increases in sugar and starch content in modern foods, and larger amounts of processing that go into creating pre-made food products, a large majority of foods in the typical American diet are high-glycemic index foods. The largest common contributor to high-glycemic index foods is the now infamous high fructose corn syrup (HCFS). The sugars in these foods are released very quickly in a shorter amount of time into the bloodstream. Because of this overload of sugar, the body (particularly the pancreas) has to quickly produce larger amounts of insulin to deal with it and the brain has a very hard time determining how to counteract the effects of HFCS. If this cycle of massive dumps of sugar into the bloodstream triggering a corresponding response of insulin release can eventually desensitize muscle and fat cells against insulin, putting even more strain on the pancreas to produce yet more insulin. This quickly turns into a vicious cycle that is the pathogenesis of Type II diabetes. This wouldn’t be so bad if insulin was not an anabolic hormone that in excess will lead to deposition of fat into your body starting with the midsection (trunk) and rapidly spreading throughout. 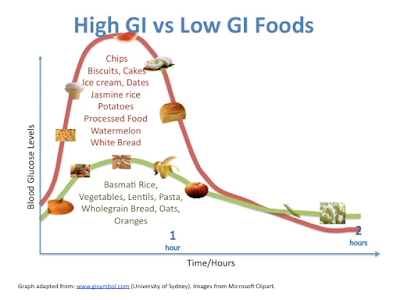 There are ways to combat the loss of phytonutrients and the high-glycemic nature of potatoes.

Bring Down the Index!

Not all potatoes have high-glycemic index, but for those that do, with a little planning, you can take matters into your own hands and reduce your intake of high-glycemic potatoes. The smaller potatoes in grocery stores with smoother skin, which are often billed as boiling potatoes or new potatoes are actually have low-glycemic index because of their immature composition makes the sugars less available to those that eat them. These potatoes are harvested earlier in the season and have a blunted rise in blood sugar than their larger more mature counterparts, which are often advertised as baking potatoes.
But what if you or your loved ones are really craving baked potatoes, but still want to avoid the blood sugar spike that comes with them? This is where the planning comes in. By cooking the potatoes a day ahead of time and chilling them for a day, the blood sugar response to the potatoes can be decreased by up to 25%. The heating of the potatoes followed by chilling modifies the sugars in the potato into a form that is released more slowly into your bloodstream, turning it into a food that your body and pancreas are much more equipped to handle and lowering your risk for diabetes and cardiovascular disease for the long-term.

You may have noticed some strange looking purple potatoes in the corner of the potato display in your local supermarket, maybe you even tried them one time as a novelty. As it turns out, despite their strange appearance and compared to their more conventional brown, red, and white cousins, these colored tubers contain 28 times more phytonutrients than our usual Russet potatoes, and an incredible 166 times more phytonutrients than some varieties of white potato! This is not a small number by any means, so while purple mashed potatoes or purple hash browns would certainly take some getting used to, they are more than worth their weight nutritionally.

NOTE: Your smaller eaters may require a special sales pitch- it can be done…

Another trick, which can be applied equally to all varieties of potatoes, is choosing the brightest colors possible and eating the skins of the potatoes. Using both of these parameters to buy and eat your potatoes will ensure the greatest phytonutrient content possible, and preparing or eating them with a healthy fat like olive oil will make these nutrients more accessible to your body.

As potatoes are stem tubers that come out of the ground, they are very susceptible to carry pesticides and other chemicals that can concentrate in the soil. Fortunately, the cost of organic potatoes is not that much more than their mutated friends due to their ubiquity.

While potatoes can only dream to be as nutritious as vegetables like kale or brussel sprouts, their low cost and versatility will keep them as a superstar among Americans. Luckily, you can take some simple steps at the grocery store and in their preparation at home to enhance their nutritional value and lower any long-term risks associated with their high-glycemic index. Following these simple guidelines will help you and your loved ones get more nutritional value out of your favorite foods!

One thought on “The Truth about them French Fried’ Potaters?”