Spring is in the air!  While it means an end to dreary, cold weather and being cooped up indoors, for many of us it also means a start to seasonal allergies. The number of allergens has been on the rise in the last few years, increasing by nearly 50% every decade since the 1970s according to the World Allergy Organization. Before we get into some of the possible whys for this alarming increase or some of the ways to gain relief from them, let’s take a look at how allergies actually work.

Your Immune System is Overreacting

Although a huge oversimplification of the process, the above statement is essentially why we have allergies. Your immune system reacts to different proteins or molecules on the surface of anything that it perceives as a threat (aka allergens). These molecules and proteins are known as antigens, and most of the time your immune system is justified in activating itself against them. As an example, your immune system should react to surface proteins on viruses or bacteria that are trying to invade your body in an effort to destroy them. However, for a variety of reasons we’ll explore later in this post, sometimes your immune system gets confused and reacts against a normally innocuous substance, like peanut butter, pollen, or cat hair. When your body encounters these antigens, it activates its defense system through specialized cells (called mast cells), which release histamine in an effort to neutralize the perceived threat. This release of histamine causes the inflammation that leads to the symptoms we commonly associate with allergies: runny nose, itchy and watery eyes, coughing, sneezing, and many others. This is also the mechanism for how the common over the counter allergy medications called anti-histamines help you relieve symptoms. They are designed to block histamine receptors on your cells, preventing the inflammation from taking hold and making you sniffle and sneeze all day.  But for many, they are not addressing the root cause of your allergy in the first place: the improper recognition of antigens.

So why is my immune system overreacting?

The part of your immune system that activates in response to allergens is called the humoral immune system. This part of your immune system creates specific antibodies against pathogens and is the type of response that is generated by vaccines and protects you from future infection by that pathogen. However, it also creates the response that produces allergy symptoms. Humoral immunity involves two major cell types, B-cells and T-cells. T-cells work by activating the B-cells through a complex network of signaling molecules.  Then the B-cells, in turn, secrete antibodies against the pathogen. T-cells can activate two different types of responses, known as Th1 and Th2. Th1 responses are generally directed against viruses or cancerous cells, while Th2 responses work against bacteria, fungi, and other pathogens that exist outside of the cell. The interplay of these two types of responses may explain some of the aggravating or relieving effects that certain vaccines may have for seasonal allergies which will be discussed shortly.

A number of complex factors relating to your environment starting back from even the time before you’re born can be the blamed for why you have seasonal allergies. Studies have found an association between mother’s reported seasonal allergies and the frequency with which their children will suffer from them. This may be due to the mother’s body priming the fetus to produce IgE (the kind of antibody that stimulates histamine release) in utero, making the child more likely to be hyperreactive to allergens that would produce IgE later in life. Studies looking at the prevalence of allergies in children raised on farms compared to children in cities or suburbs found that the children of mothers who worked on a farm had the least number of allergies.  This is thought to be due to their exposure to common allergens throughout their pregnancy.  This is strong evidence that the conditions the mother’s immune system can affect the function of her child’s immune system. Similar research has been done to review the effect of being around animals, both household pets and livestock.  It suggests that children who were exposed to animals from birth were half as likely to develop allergies as children who had no pets. It was also noted that close proximity to metropolitan areas were associated with higher risk of developing asthma and other allergies. This is likely due to higher pollution levels and the fact that pollution creates new allergens that our bodies have not evolved with over the years, making our allergic response to th

em much stronger. The effect of this is most evident

when comparing the prevalence of seasonal allergies and asthma in developed vs developing countries where the population tends to be more rural.

Relationship Between Vaccines, Antibiotics, and Allergies

Since vaccines work by priming your immune system, it’s not surprising that they can have an effect on the development of allergies. There’s some evidence that the BCG vaccine, which is used in many developing countries where tuberculosis is more prevalent, may produce lower rates of asthma and other allergic responses. The researchers believe this may be because tuberculosis falls under the Th1 category of immune responses and by activating that type of response lowers the body’s Th2 responses. Another study found that the vaccine against pertussis was linked with slightly higher rates of seasonal allergy development, this vaccine activates a Th2 response, which may also enhance any responses to allergies. Seasonal allergies are frustrating to deal with and can definitely decrease your quality of life when they are present, but there is much controversy of the growing number of vaccinations and their efficacy causing many countries to eliminate them from their healthcare system. These kinds of studies do definitely show the need for more research into the long-lasting impacts of vaccines.

Exposure to antibiotics early in life also increases the risk of developing allergies. Antibiotics can disrupt the gut microbiome which is just developing in young children and plays an important role in the development of allergies. The human body requires “good” bacteria to help prime a child’s immune system for what is and isn’t an appropriate reaction to antigens.  Its collection of “good” and “bad” bacteria is called the human microbiome and is the target of a frenzying amount of research of late. It’s implication on health are tremendous from its effects on digestion and obesity to certain mood disorders to its known impact on allergies.  Frequent courses of antibiotics clear out your “good” bacteria (along with the bad) and have been shown to deprive the immune system of this priming when given early in life, causing it to react more violently and frequently to neutral stimuli. If over 99% of the DNA in your body does not belong to you… are you really who you say you are??

Unfortunately for most allergy sufferers, most of what’s been discussed so far in this post relates to factors we don’t have much control over, how stressed our mother is during pregnancy, where we grew up, whether we were exposed to household pets or livestock from birth, so for those of us who can’t pick up and move to the countryside and start raising goats, how can we get some relief from our already formed seasonal allergies? As previously mentioned, antihistamines are commonly prescribed for allergy relief. Speaking from personal experience though, these do not always alleviate allergy symptoms, especially if you only start taking them once you’re symptomatic and your immune system is already ramped up. Steroid based nasal sprays are another commonly prescribed conventional treatment which work by generally suppressing your immune system. This approach to care is like throwing the baby out with the bath water, especially for people whose immune systems are already suppressed by preexisting conditions like diabetes or cancer. Allergy shots are a different means of treatment which involves injecting a small amount of the allergen into the body over a long period of time to try to desensitize the immune system to the antigen and eventually stop the allergic response altogether. However, studies have shown these work better for year-round allergies than seasonal ones.  At best, these treatments can provide symptomatic relief (at least until next year), but almost none of them address the root cause.

Probiotics have been shown to relieve allergy symptoms and even cure allergies altogether! This makes sense as probiotics can also have anti-inflammatory effects by supporting the natural flora of the gut, if you’re interested in learning more about this and haven’t already check out our “Eat Poop and Live!” post which is all about the gut microbiome and its effect on your health. The mechanisms of how gut microbes may effect the immune system are still not completely known, and more study is needed, but they have been definitively shown to provide symptomatic relief and improve quality of life for those who take them. 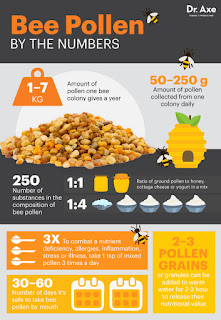 Bee pollen and local honey are perhaps one of the most potent natural allergy treatments. Bee pollen naturally reduces the amount of histamine in your body, and should be purchased from local vendors so that it contains the pollen from the area you live in. When taken starting in small doses and gradually increasing, it can work in a similar way to the allergy shots mentioned earlier in this post, acclimating your body to the allergen so that it breaks down its response to the pollen. A few cautions go along with the use of bee pollen though, if you have an allergy to bees, it may cause a dangerous allergic reaction, and you should discuss with your doctor before using it. Additionally, women who are pregnant or breast feeding, or anyone on blood thinners should avoid bee pollen or have a conversation with their doctor before starting it.

Acupuncture is a form of Eastern medicine, which works by balancing the flow of “qi” (pronounced “chee“) in the body. Modern hypotheses believe it may work by stimulating the release of certain neurotransmitters by activating specific nerves, or in the context of allergy relief, suppressing proinflammatory molecules, which activate the Th2 response as discussed previously. A recent study showed that when comparing groups of allergy sufferers who were treated with anti-histamines alone, antihistamines and acupuncture at non-meaningful sites, and antihistamines and acupuncture at meaningful sites, the group that was given meaningful acupuncture reported the greatest relief of their symptoms, long-term cure was not studied, but training the body to respond in this way through acupuncture has been suggested to be curative by some experts.

The development and factors that influence the severity of allergies are incredibly complex and often difficult to untangle in the modern world where we’ve deviated so far from how our ancestors lived. Maximizing our exposure to common allergens, dirt, and animals early in life can help minimize the chances of developing allergies later, and even later in life, gradual exposure to allergens such as bee pollen can provide symptomatic relief that rivals or exceeds that of over the counter drugs. While the full interplay of all the factors contributing to allergies will need more time and research to unravel, it’s clear that our modern lifestyles play a huge role in how widespread they have become, and trying as much as possible to get “back to our roots”, so to speak, may help to reduce the prevalence of allergies in future generations.